Do you remember those sunny and warm days when you want to relax in the park? Where you wanna lie on the grass or walk with your dog? And instead, you arrive at the park and find it decked out at the party?!
Sure Nextifal is this: a melting pot of colors and sounds, where you can feel at home!
Because the sportsman who teaches you how to use weights, or the street artist who tells you how to express your creativity with a canister of color, you don’t have the chance to find them every day together, side by side.

And if instead, you liked something more dynamic or, on the contrary, more relaxing you can find an activity that is also suitable for you!
You could take part in a hip hop contest or try to swing 3 or 4 pins in the air while balancing on a wooden board, but maybe you’re a bit lazy like me and then listen to live music and watch people that dance is the best solution! 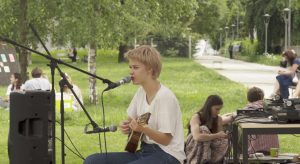 Nextival it was an opportunity to confront, to meet new people, to laugh together, to learn about a new point of view and to discover new interesting activities…
And then why stay at home when you can become part of a bigger story? 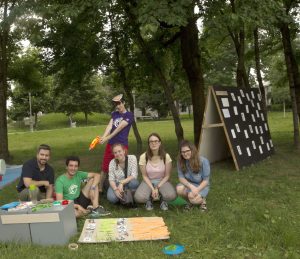 As far as it is the 9th post, after it will be finished, I can start a final countdown (sad emoji here TT). And this fact leads me to the thought that there is not much time left but still a lot of things to do. At first, you think that you have so much time that will be able to make all your plans happen, but the time runs so fast that at one minute you look backwards and you see – there almost a year passed – and it gets clear that you actually didn’t manage to complete even a half of your to-do list. So now I have this strange feeling of a strong need to arrange a time as productively as possible during these 3 months, just to feel completeness and satisfaction afterward.

Anyhow, I need to tell you how I spent this month.

It started with filming some material for promo of one big project Socialna akademija was part of. It was held in a big hall. The event itself was full of youth spirit so it had an extremely good impression on us. It consisted of 2 main parts: active groups’ rewarding and entertaining part. Skipping the first, I’m going to tell more about the second and most fun and impressive one. There was a performance of one famous acrobatic group called “Dunking Devils”. They were doing complicated tricks combined with basketball play. The performance was so catchy that I couldn’t take my eyes off it.

Besides this event, I was also doing small tasks and was practicing with Adobe Illustrator.

And the cherry on the cake – voyage to Paris.

It wasn’t just a sightseeing trip, I also went there for my favorite Korean band’ concert – BTS. It has been passed 2 days since I attended it, but I still can’t believe it. I need some time to realize that it actually had happened and one of my biggest dreams in life came true. My emotions were so strong that I even cried after it has ended – and it unusual for me, believe me!)

Furthermore, I met a lot of nice people who are also BTS fans. And this is amazing to see how music can connect people of different nationalities and ages, and make them behave like best friends from the very first encounter. I can say that I never felt more included in society. From now on I will set another goal for myself to go to their concert one more time, whatever it takes! Just to feel all those emotions once again! Because what we will keep with us for the whole life and what doesn’t have expiry date is our memories and strong emotions we got through.