Hurting someone’s feelings, causing problems for them and making them feel bad are not new phenomena among young people. We would like to believe that we are teaching young people intra- and interpersonal skills that will help them feel confident in themselves as well as emphatic and respectful towards others, but the reality is that peer bullying has been a big challenge for schools, youth organizations, and local communities for many years. Is cyberbullying just a contemporary expression of this?

Studies are beginning to show3 that cyberbullying is very different from traditional schoolyard bullying. Some important differences are shown in the picture below. 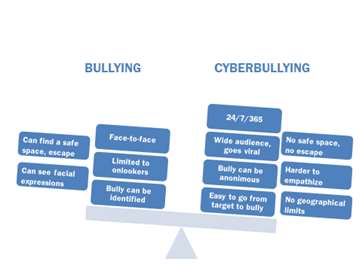 Traditional bullying is usually limited to certain times and places, for example, the playground or the way to school. This gives the target some (although limited) sense of predictability, and there are times and places where he or she can feel safe. In contrast, technology is everywhere: we have our phones and computers around us all the time. Cyberbullying can happen 24 hours a day, 7 days a week and 356 days a year. It can happen in our close proximity or through great distances. It is difficult for the target to find a safe space.

Furthermore, traditional bullying is characterized by the need for power and control, aggression and proactively targeting the target. These characteristics may not be present in cyberbullying cases.

Cyberbullying is “an easier way to bully because unlike traditional bullying it doesn’t involve face to face interaction.”3 Hiding behind the computer decreases empathy the bully feels toward the target. When we do not see the person’s reaction to what we post or text them, we might not know that we have gone too far. Desensitized by the computer screen, it becomes easier to say or do things we would not do to a person’s face. Furthermore, while “traditional” bullies can mostly be identified, it can be very difficult to find out who the anonymous cyberbullies are, making it easier for bullies to avoid seeing and facing the consequences of their actions.

In traditional bullying, we are usually working with a bully, target or bystander. Although we often find that bullies have previously experienced violence themselves (perhaps when they were younger or by someone with more power), the roles in each case are pretty clear. This is not necessarily the case in cyberbullying. Young people often play multiple roles at once, such as cyberbully, target, and witness. There is also no clear-cut profile of who can be the cyberbully and who can be the target, it can happen to anyone.

An especially problematic aspect of cyberbullying is that it often has many, many onlookers. Traditional bullying is more often done in private than in public. But in cyberbullying, technology makes it easy to quickly spread content to a large number of people. Online bullying can quickly become very public or even viral. This wide audience makes the experience especially difficult and embarrassing for the target.

Current research in public health indicates that many “social” factors such as education, socioeconomic conditions, access to services and resources, family ties, employment etc. are closely related to the person’s general health and mental health, including the ability to avoid or cope with violence and “traditional” bullying. Such connections with cyberbullying are less clear. It rather seems that there are no ‘typical’ cyberbullies and targets, it can happen to anyone. For example, it is well documented that in traditional bullying males are more likely to become bullies than females; that older adolescents are more likely to bully than preadolescents, and that bullies are more likely to have low than high self-esteem. For cyberbullying, on the other hand, age, gender or self-perception do not seem to be reliable predictors. Interestingly, high-quality relationships with important adults seem to be a strong protective factor in both types of bullying, traditional and cyber.